Reformers vs Capitalists: hypertext and simulation in The Election of 1912

Immerse yourself in the era of railroads and reformers, take the role of Theodore Roosevelt in the run for the presidential seat in a remarkable simulation The Election 1912. A Hypertext Study of the Progressive Era by Mark Bernstein and Erin Sweeney from 1988. Pre-electoral live traversal of the work will be held by Electronic Literature Lab at Washington State University Vancouver.

[1] This is the first in a series of notes about works of the early e-lit which are the main focus of the forthcoming Rebooting of Rebooting Electronic Literature vol. 4 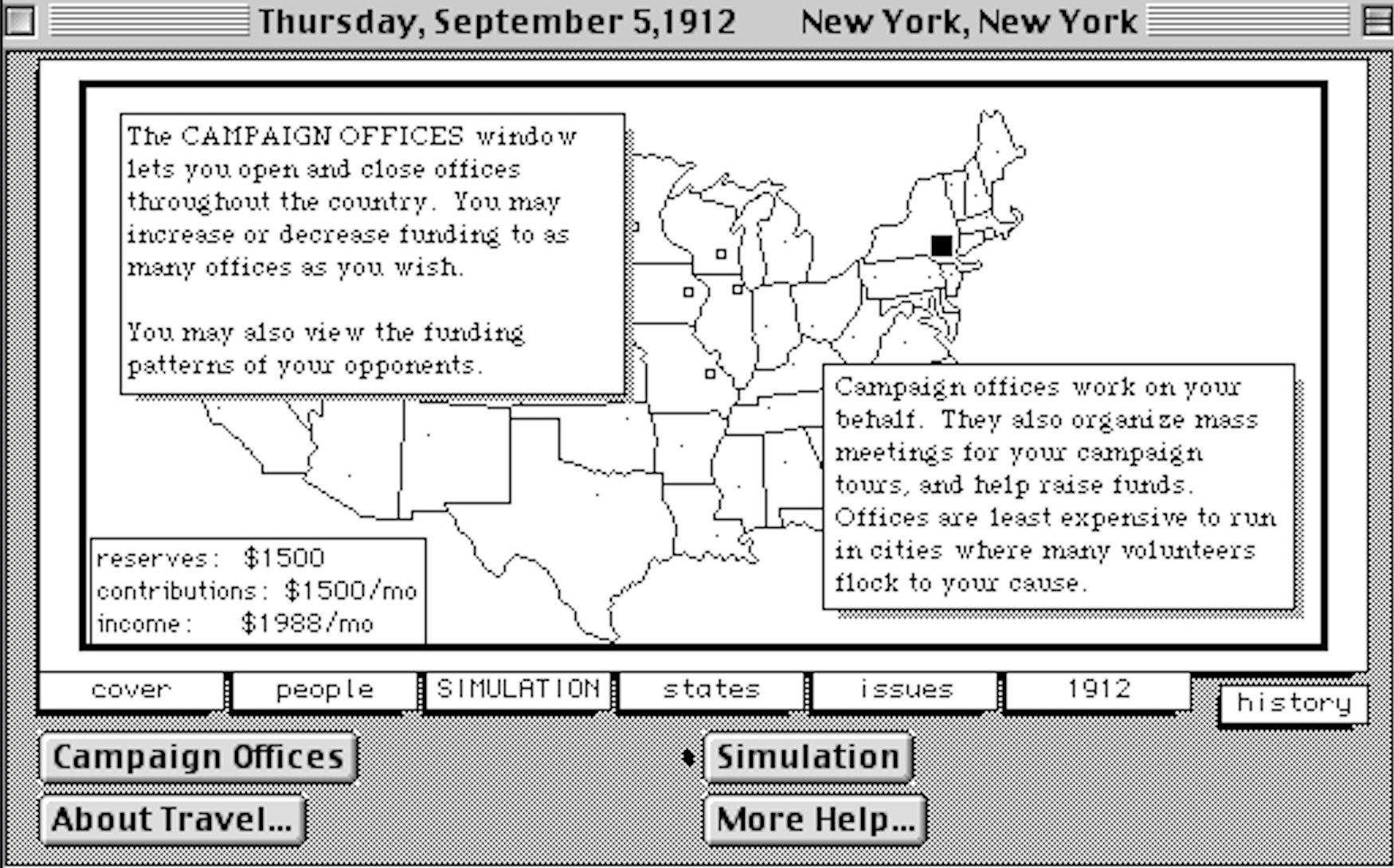 Published on a tiny 400K disk and run on computers with less than 1MB of memory The Election of 1912 combines non-linear narrative with a robust simulation mode set within a historical background of one the most fascinating U.S elections featuring 4 candidates from democratic, republican, progressive and socialist parties. The simulation consisted of elements of asset management game and had a role-playing favour to it. The vast, historical narrative focuses on key players and central socio-economic issues that dominated the election. At the beginning of the 20th century the industrial revolution made America an economic empire, yet often at the cost of its people, leaving a lot to be desired in the areas of worker’s rights, women’s rights and the legal and social standing of Afro-American population. Not to mention child labour. Skilfully crafted narrative paths take the reader from small detail to bigger picture, from opinionated summary to raw historical sources and trivia, including newspaper headlines, quotes from speeches and letters. There are even illustrations and sound clips, a huge achievement considering the memory constraints of the disk and the Mac hardware AD 1988. To win the election candidates must present a solid reform plan and earn votes of the overlooked and vulnerable parts of society.

As Theodore Roosevelt, the reader must defeat other candidates in a carefully managed campaign by monitoring budgets of electoral offices, travelling the country, exchanging mail with his influential supporters and checking the progress on the electoral map of U.S The game will send updates about current developments, incoming mail or interesting newspaper stories. As in many simulations, turn-based gameplay has a standard and accelerated mode (one can play day by day or press a button and let a weak pass instantly).

The Election of 1912, a pioneering hypertext, can serve as an interesting reference point in the history of digital culture. It was published when the divide between games and “serious hypertext” was not yet formed and text adventures, educational storytelling and literary fiction inhabited the same field of mostly text-based entertainment on computer screen. At the same times it can serve as interesting landmark in the development of core principles of the modern user interface. What role should navigation play in the digital text? What types of links most efficiently reflect its structure? How to fit a serious historical research into 9-inch computer screen? Between 1985-1988 no clear answers to these questions existed. Ted Nelson, the author of Xanadu and Computer Lib/Dream Machines was a beta reader of The Election of 1912. As Bernstein notes, Nelson’s biggest concern was that the reader will feel lost in hyperspace of segmented text and multiple links between the segments. This reservation informed UI design decisions in the work, among them one of the first implementation of navigation breadcrumbs which later become a popular orientational tool, especially for the Web. Nevertheless, some of the extra navigational support in Bernstein’s and Sweeney’s work might seem superficial today. There might be just a bit too many ways of navigating the text, too many buttons and too many link types, considering the limited screen size. The decade of robust research on hypertext and UI which started at the time of publication of Election 1912 proved that readers are just fine with associative and even disjunctive mode of reading. 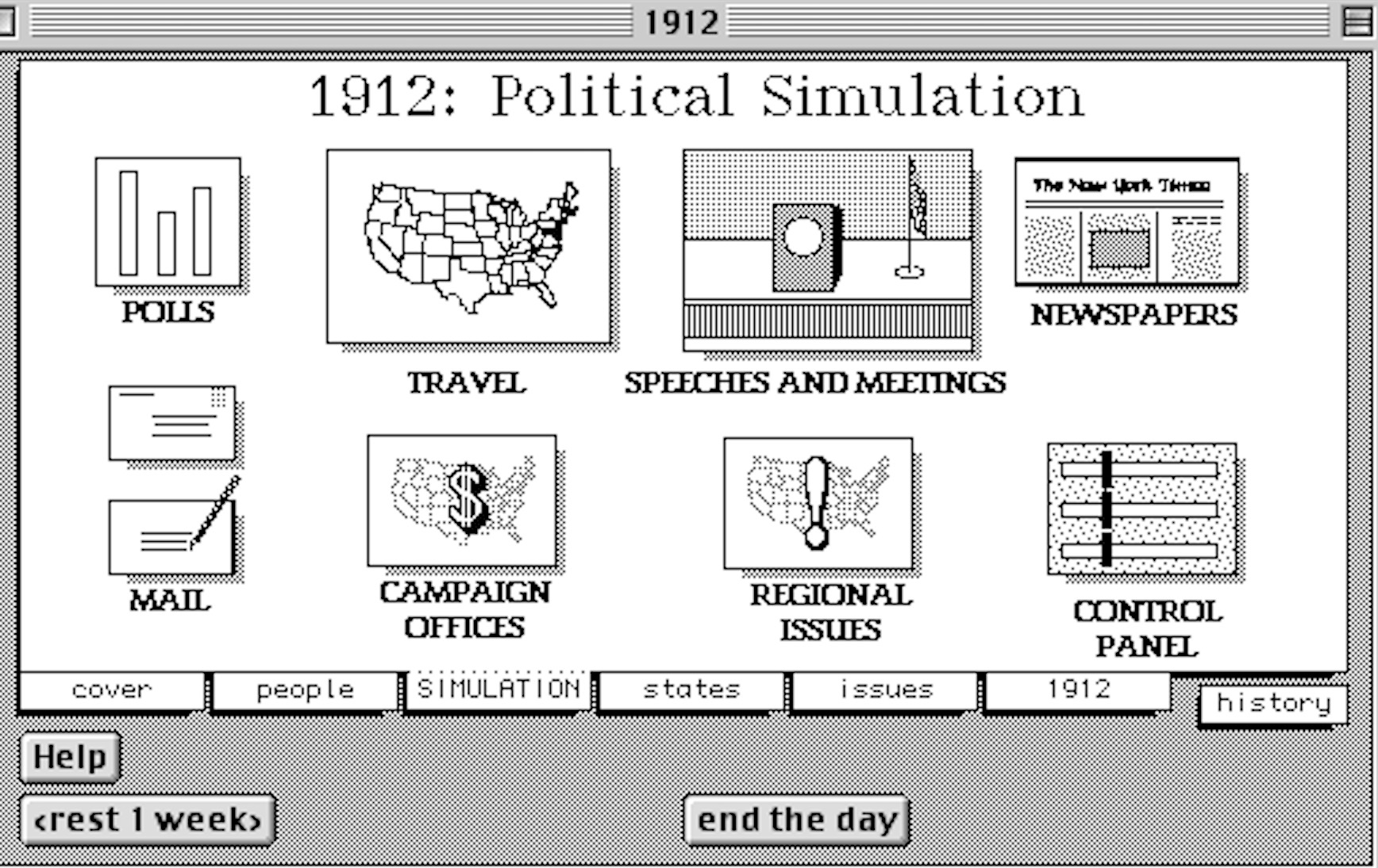 The Election of 1912 is the first of 48 hypertexts published by Eastgate Systems. The work was created at a time when several competing hypertext systems were fighting for the hearts and minds of rapidly expanding digital audience. There was Ted Nelson’s Xanadu, NoteCards from Xerox Park, Intermedia and many others. In August 1987 Apple released its HyperCard software which brought text and computer graphics animation to wider audience. At the same time, during the first Hypertext conference in 1987 Jay D. Bolter and Michael Joyce presented Storyspace and the demo of afternoon.a story. Hypergate, the in-house platform of Eastgate combined features of several of these systems. Yet after the Storyspace licensing and distribution agreement with Bolter and Joyce, the development of the platform stopped. Only two more works on Hypergate were published: the tongue-in-cheek hard-boiled fiction digital gamebook Sucker in Spades by Robert di Chiarra (1988) and the phenomenal hypertext sci-fi King of Space by Sarah Smith (1991).

Join us this Thursday at 10 A.M PT for the Live Traversals of The Election of 1912, performed by authors, Mark Bernstein and Erin Sweeney and operated from the ELL lab by Dene Grigar: